Welcome to the Twenties! How weird does that sound? I had an extra busy final week of the year so my yearly wrap up post is just a touch late.

2019 saw me primarily occupied with getting up to speed in my new job. But I also wrote more this year than I have in a very long time. I sold two stories and saw one of them published in 2019. If you haven’t already you can listen to my take on Beauty and the Beast, the Rose Sisterhood, on Cast of Wonders. Leigh Wallace’s narration is excellent.

Most of my writing-related activities in 2019 centered on my monthly meetings with my awesome critique partners. In addition I attended Fourth Street Fantasy again and have every attention to go again in 2020. I also hosted another 2-Page Workshop for MinnSpec.

Okay Enough about me, time to gush about my friends. Two of my Viable Paradise 20 classmates published novels this year. I got to read the opening chapters of Valerie Valdes’s Chilling Effect at VP and fell in love with it. I was thrilled when the rest of the book was as funny and irreverent and heartfelt as those first chapters. I highly recommend it! I also read the first chapter of AJ Hackwith’s Library of the Unwritten. And while I have not yet read the full novel (though I will be soon) I have no doubt it will be as good as the amazing sample I read on the Island.

Several other of my VP classmates had good years, publishing stories and poems and putting out Hugo nominated podcasts. So if you are looking for even more reading material check out Wren Wallis, Karen Osborne, Jo Miles, and Jennifer Mace.

On to the book talk!

My favorite reads were, in no particular order:

The Hate You Give by Angie Thomas

Wintersmith, I Shall Wear Midnight, and The Shepherd’s Crown by Terry Pratchett

The Calculating Stars and The Fated Sky by Mary Robinette Kowal

2019 also saw adaptations of two of my favorite albeit very different books. BBC and Amazon’s Good Omens miniseries was a highlight of the year.

And Greta Gerwig’s adaptation of Little Women was a surprisingly fresh take on a 150-year-old classic.

And though it wasn’t based on a book Rian Johnson’s murder mystery, Knives Out, was a treat for this book lover and made me covet the house it was set in.

Another highlight was Moving Theater Company’s Cabal a play/escape room event. IT was immersive and inventive. https://www.walkingshadow.org/cabal

This week my story Seeded was published by Gallery of Curiosities. GoC is an audio market, which is a first for me. I love the reader they chose and am very pleased with the final product. This is one of my stranger stories but I think it reflects my sense of humor pretty well. It is the second of two stories in the episode.

I rediscovered this little story while cleaning up my writing folders on my hard drive. I wrote it probably about five years ago in response to a forum challenge to write a love story in under 1,000 words. I like it more than I remembered. Enjoy!

I knew nothing about her; not her name, not where she was from, or if she was seeing anyone. All I knew was that the woman of my dreams was dressed as Hogwarts, and she was getting away.

It was love at first sight when I spotted her on stage between a Dark Phoenix and an Optimus Prime. Hers was certainly not the sexiest costume in the lineup. That title belonged to a scantily clad interpretation of a Ghostbuster. Nor was hers the largest, that went to a team of five people dressed as the Catbus from My Neighbor Totoro. Nevertheless, from the moment she stepped onto the stage to the moment she finished her allotted strut, the Quidditch pitch bobbing alluringly on her left hip, I could not take my eyes off of her.

Despite getting a standing ovation from the crowd, to which she gave an awkward curtsy, she did not place in the top five. While I thought the judges were crazy to exclude her, I was happy to see it. The sooner she was out of the contest, the sooner I could meet her. As the contestants were eliminated one by one, they filed off the stage and into the audience. The more impressive the costume, the more people swarmed to have their pictures taken with it. I dodged and weaved my way from the back of the room to the area next to the stage.

It took some time; the costume contest is one of the most popular events and the room was packed. Fortunately, I knew that with her bulky costume she could not move any faster than I could. I forced my way through a crowd of people I thought were waiting to be photographed with her, only to find a breakdancing Ewok in the middle. Irritating little showboaters!

“Where did Hogwarts go?” I shouted over the din.

“I think she was going for the Joss Whedon panel,” a partially transformed Bruce Banner replied.

“Which room?”
He shrugged. I hurried as quickly as I could out the door. Back out in the hall, I asked everyone I saw if they knew the room number for the Whedon panel, finally getting it from a guy handing out promotional wrestling magnets. It took another fifteen minutes to make it through the throng of conventioneers to the proper room. Just my luck, the door was closed.

“Sorry, it’s full,” the con staffer said, sounding harassed as twenty other people were hovering by the door.

“I don’t want to get in, I just want to know if you saw a girl dressed as a castle go inside.” The staffer looked at me like I was a loon, and turned to rebuff the next person trying to get by him.

“I know,” groaned a girl in a Captain Hammer tee. “I got in line two hours ahead of time, and I still didn’t get in,” she griped.

Two hours? That meant my would-be paramour hadn’t gotten in either!

“Did you see a girl in a Hogwarts costume?” I asked the disgruntled Whedonite.

“Is that what she was supposed to be? I thought she was Castle Greyskull.”

I took off sprinting, or as close to it as I could get when every square foot of space was taken up with people swinging swag-bags. I found myself back on the main floor, a football field-sized labyrinth full of vendors selling all the sci-fi/fantasy/comic book/gaming paraphernalia you could imagine.

Frantically, I took the route that was flowing the smoothest at the moment, praying she’d done the same. Finally, I spotted her headpiece through the sea of bodies between us. I could clearly see the unmistakable silhouette of the astronomy tower, perched on her head, complete with an action figure of Professor Dumbledore dangling from it.

“Hey!” I screamed at the top of my lungs, desperate to be heard over the cacophony.

“Hey! You with the turrets!”

For a moment she paused. I saw the action figure swing around, as her head turned. I leapt forward, my heart beating in my chest, only to barrel straight into a vampire covered in body glitter.

“No,” I moaned, as my unfortunate collision partner tried to help me off the floor. It was too late, by the time I regained my feet, there was no sign of her. I trudged to where I had last spotted her. All I found was a crumpled piece of cellophane, that had been a part of the Black Lake. I folded it neatly into a square and put it in my wallet.

I searched the con for the next two days. I never saw her again. But I’m not giving up. I will be back next year, and I’ll be damned if I won’t be the most accurate Platform Nine and three-quarters you have ever seen. 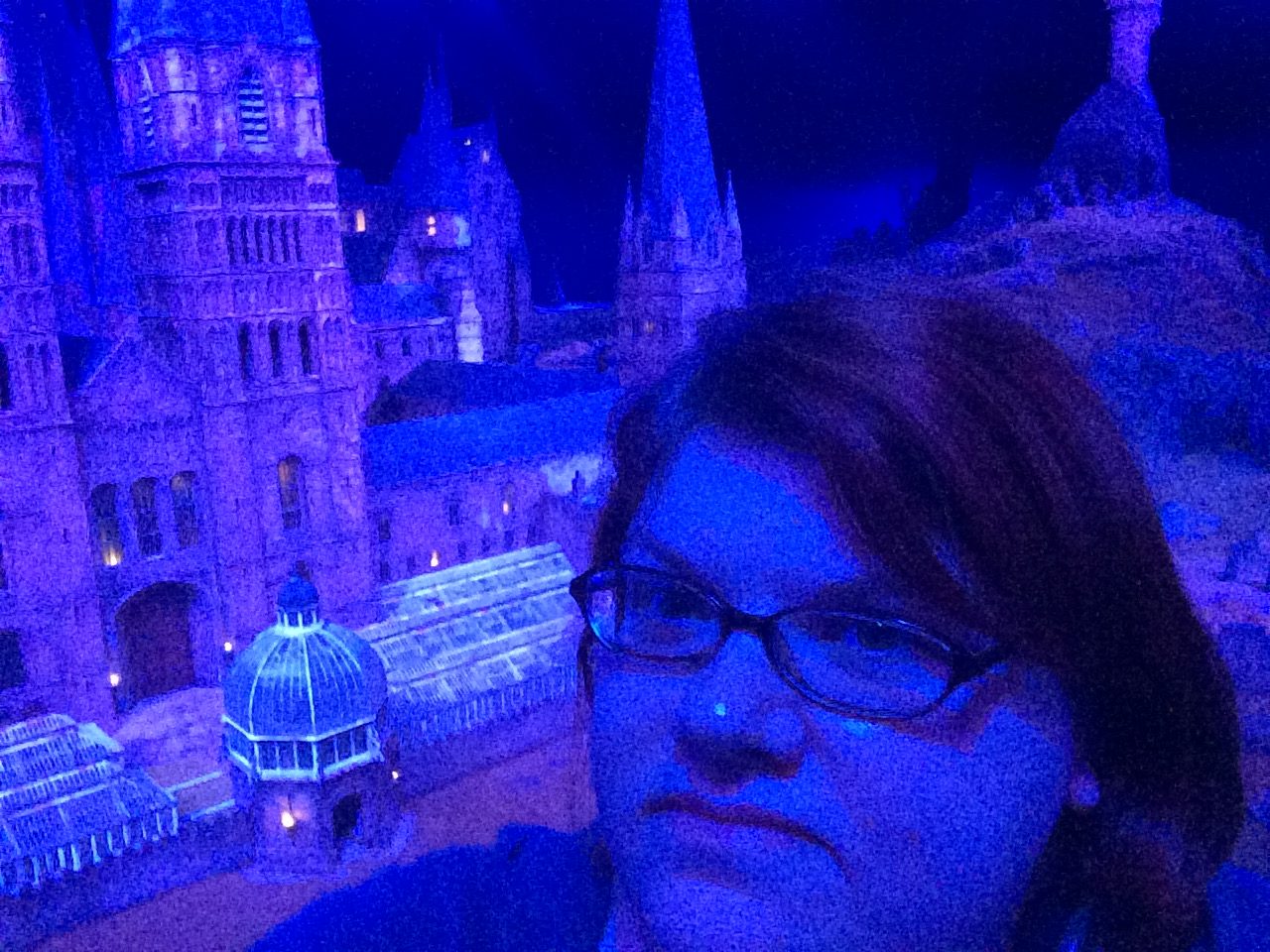 And here is a selfie I took with the Hogwarts miniature at the Harry Potter Studio Tour in London. It’s hard to tell in the photo, but I’m standing on an elevated ramp and the miniature is enormous, the room it’s kept in is about the size of a basketball court. I’ll admit, I may not have fallen in love when I saw it, but I definitely got chills.

You can now read my story Wandering Eye on the Lorelei Signal.

“The Lorelei Signal is a web-based magazine dedicated to featuring
3 dimensional/complex female characters in Fantasy stories.”

I am very proud to have one of my stories published there. There is also a lovely piece of original artwork to go with it. That is a first for me.

Also if you are so inclined there is a donation button at the bottom of the page. Any donations go to cover the operating cost of the magazine, and any money raised beyond that cost is paid out to the authors and artists.