I’ve been rewatching Gilmore Girls recently. I started before the announcement of the revival because I had the DVDs and hadn’t seen it since it first aired. I was doing a season every few months but sped up once Netflix declared a November release date for the new series. Watching so many episodes in such a short time, I’ve noticed a few things that I didn’t the first time around.

I relate to Paris more than is probably healthy. Rory’s hair is almost always fantastic. Lorelai’s hair alternates between fantastic and highly questionable.

Rory’s boyfriends were all horrible. Seriously Logan Huntzberger is the walking embodiment of white privilege with the added bonus of being a master in the art of gaslighting. Fuck that guy.

On a very tangential tangent, in an episode I just watched, Hamilton’s Leslie Odom Jr. popped up in a tiny role as the editor of Princeton’s newspaper who participated in a panel about college papers with Rory. He has two lines and is referred to as Pompous Princeton Guy. And he is sooooo superior to all of Rory’s canonical love interests! I now only want him to return and sweep her off her feet. Dean, Jess, and Logan need never be seen again. Okay, I’ll allow Jess to appear but only because he’s important to Luke and he’s the only one of the three to have a little positive character development. But anyway Rory + Burr now and forever! Wouldn’t proud DAR member Emily be delighted? Even if he is a villain in our history books.

The elder Gilmores can be infuriating, but it’s hard to hate them. And seeing Emily as a widow is going to be intense.

Lane’s season seven plot is so egregious it makes me wonder if Keiko Agena did something unspeakable to one of the writers’ dogs in real life?

But the thing I need to talk about, the thing that makes me trepidatious about the new episodes is that there are a lot of gay and fat jokes. I texted my sister about it the other night. I going to paste parts of our conversation below since I articulated most of what was bothering me. Also, I’m lazy. 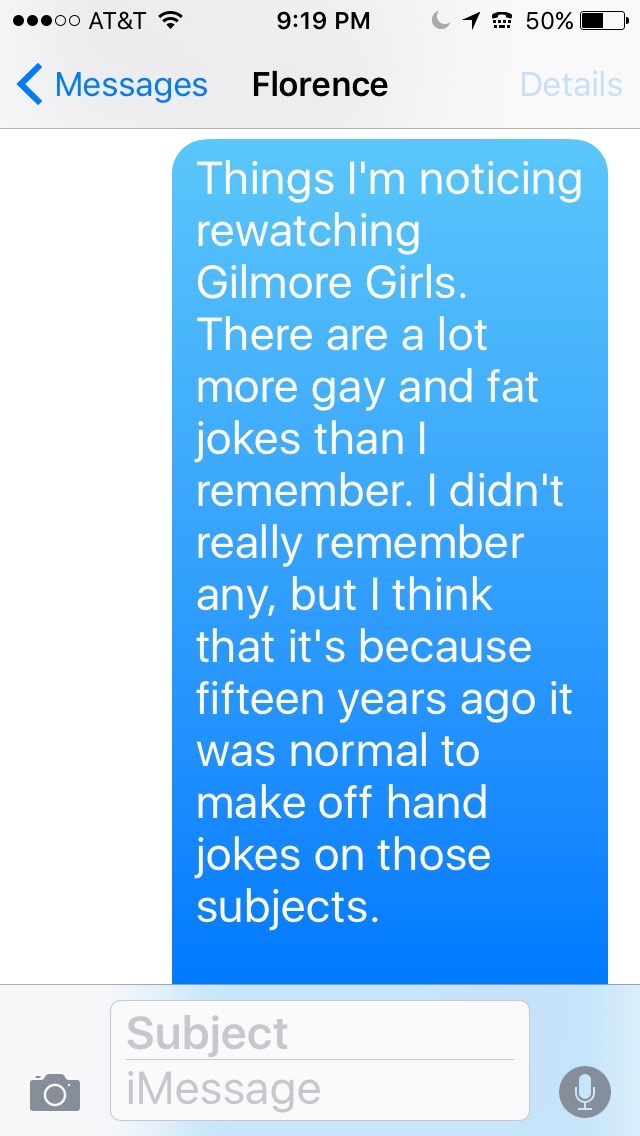 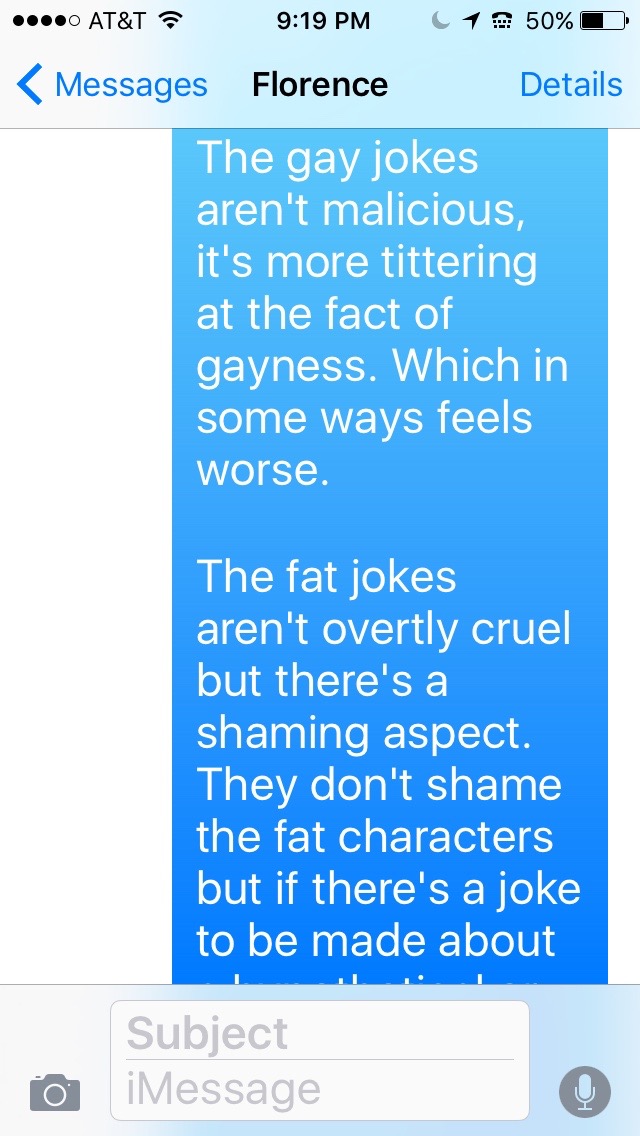 Let’s pause here. As I said the gay jokes tend to be in the vein that the concept of homosexuality is inherently funny. There isn’t any sense that the people making the jokes think gay people are disgusting or unnatural. But references to anything related to queer culture is treated like a punchline.

Pajiba actually ran a think piece on the subject in 2015 that I found while looking for examples. The full article can be found here. The following quote pretty much sums up my thoughts on the tone of the jokes and my reaction to them.

“But I’m not here to review the show (though I’ll toss out the obligatory flashing of Gilmore gang tattoos by declaring that I’m 100% Team Jess), I just wanted to throw out an oddity I noticed. That show has at least every couple of episodes a throwaway gay joke that is just flat uncomfortable. None of them are particularly offensive, in fact all of them are basically the same joke: guys without girlfriends are obviously closeted gays. Joke that Luke has a date after years of not, well good for him, people were starting to talk, HAHAHAHA. Town dysfunctional Kurt manages to get a girlfriend, nice, because you know what people were starting to think, HAHAHAHA.
I’m certainly not trying to slam the show as homophobic, but it’s a fascinating example of how that slow movement of what is culturally acceptable happens without us even noticing. It’s one thing to point out that James Bond was a misogynistic douche in movies made fifty years ago. That seems enough time for us to recognize that times and culture change. But Gilmore Girls is barely a decade old, so being able to pick up on the way that shift has slowly happened is intriguing. …But what’s interesting about noticing it in the annals of Stars Hollow is that it’s not special, it’s just the passing and casual jokes.
I remember it being that way, and most of you probably do, too. At one point, those jokes were funny. Now they’re not. They’re uncomfortable because you realize they’re hurtful, even if people then didn’t find them that way.”

The fat jokes are worse in my opinion because they do often equate fat with gross or pitiful. There are a few overweight characters on the show, and to its credit, the fat jokes are never directed at them. When the show pokes fun at Lorelai’s best friend and business partner Sookie, it’s about her quirkiness or that she’s easily distracted. Not about her weight. If they make a joke at the expense of dance teacher Miss Patty it’s about her past as a showgirl or her taste for younger men. If they’re going to make fun of Taylor the town’s resident bureaucrat and boy do they ever, it’s because he’s a control freak and borderline megalomaniac. It’s not about weight. It’s almost like the characters are multifaceted and can’t be reduced to a single physical attribute. It’s one of the reasons I really love the show.

Full disclosure I identify as bi and physically I am a lot closer to Sookie or Babette or Ceaser the Second than I am to Lorelai or Rory. If that makes me more sensitive to these types of jokes, so be it.

Despite not fat shaming their characters, the writers still go for the fat jokes. They just aim them at people who don’t appear on camera. Like celebrities or random people they run into offscreen. I haven’t been cataloging the jokes but one from an episode I watched a not too long ago went something like this.

Lorelai and Luke return to the diner after a day at the mall. Lorelai looks into a shopping bag and says “What’s this?” displaying something pink and silky. Luke says “it’s the underwear you bought.” Lorelai feigns offense and shows a pair panties to him and the audience. They are large and unflattering. Luke says he didn’t notice the size and they speculate that they switched bags with another woman at the store. If that were the end of it, it would be about the same level of dated and awkward as the gay jokes. But it doesn’t stop there. Lorelai continues to pretend outrage at being mistaken for a fat person and goes on and on about how sad the woman was, implying that she’s a lonely spinster with too many cats. Based only on the fact that she is fat and I think a cat related bumper sticker. Is it obvious Lorelai is joking and not really angry at almost being called fat? Yes. But it’s still a good three or four minutes of fat shaming, presented as charming banter.

And it looks like I’m not the only one to pick up on it this time around. I found this article on Bustle while again searching for examples.

Okay back to the texts. 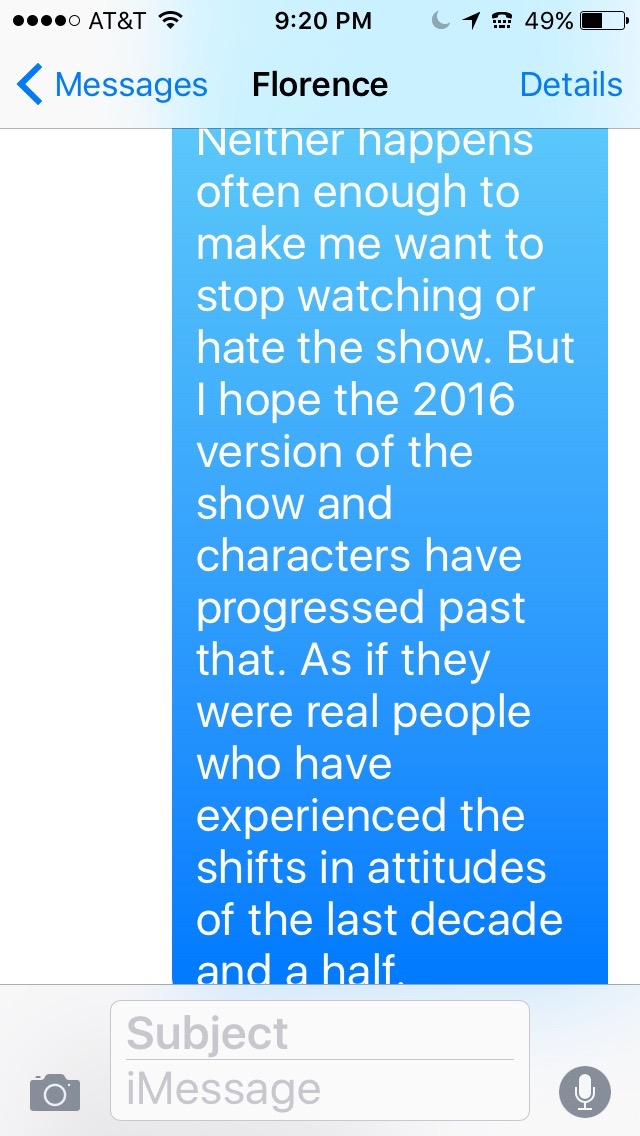 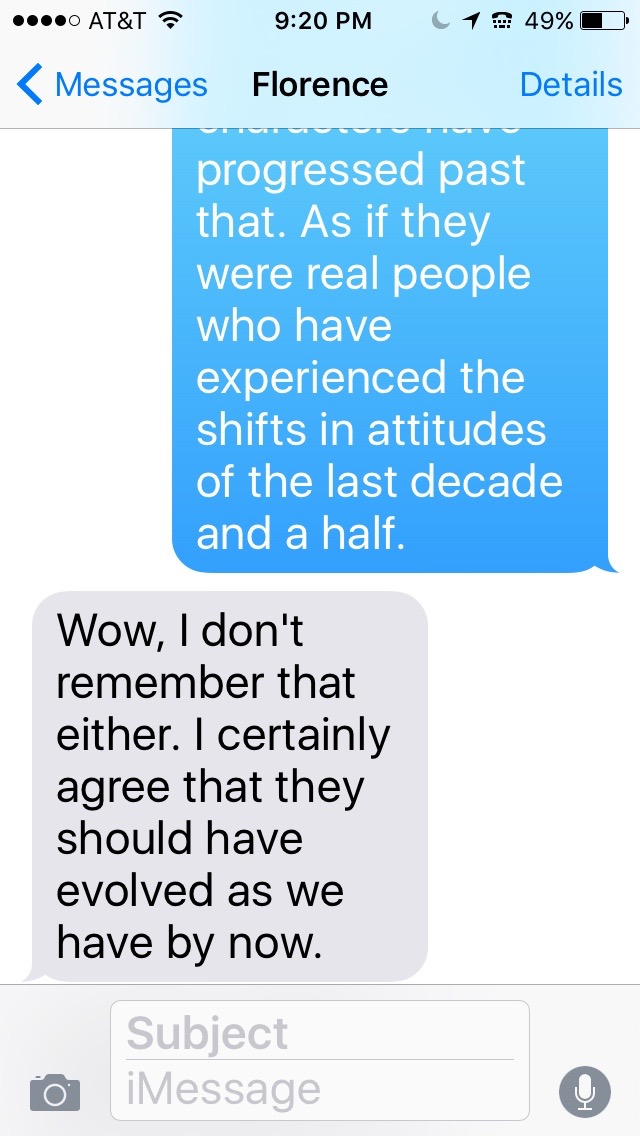 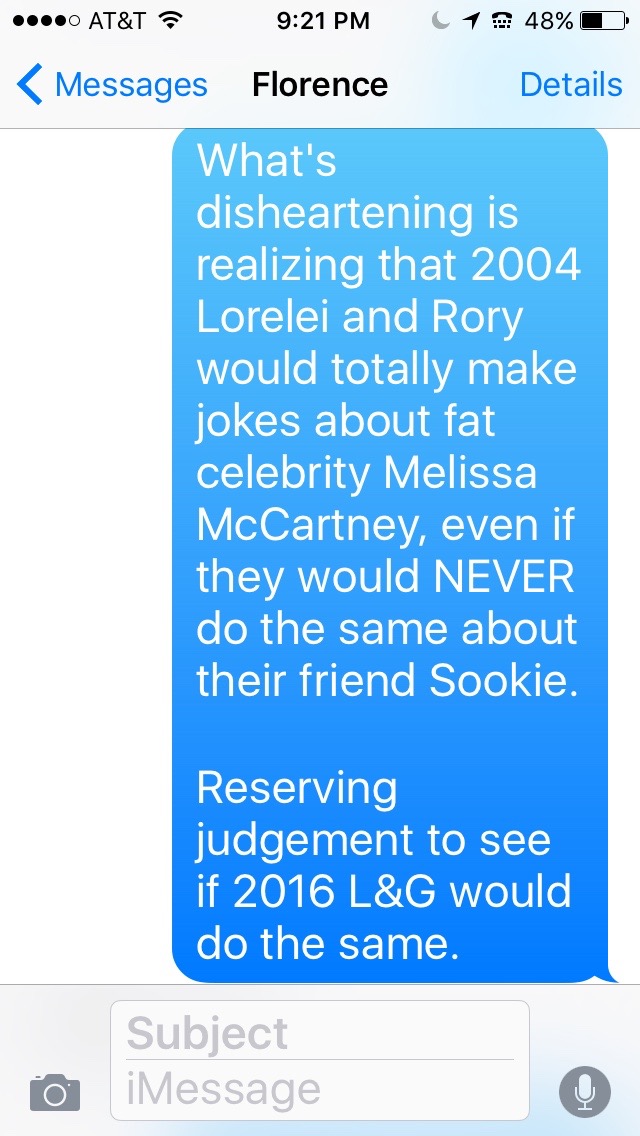 I meant Melissa McCarthy, not McCartney.

I doubt the revival will make Melissa McCarthy jokes unless it’s a winking “How about that all female Ghostbusters remake?” But I can see them making “harmless” fat jokes about Rebel Wilson or Gabourey Sidibe or Lea DeLaria. At least they would during the show’s original run. My hope is they won’t in the upcoming Netflix series. 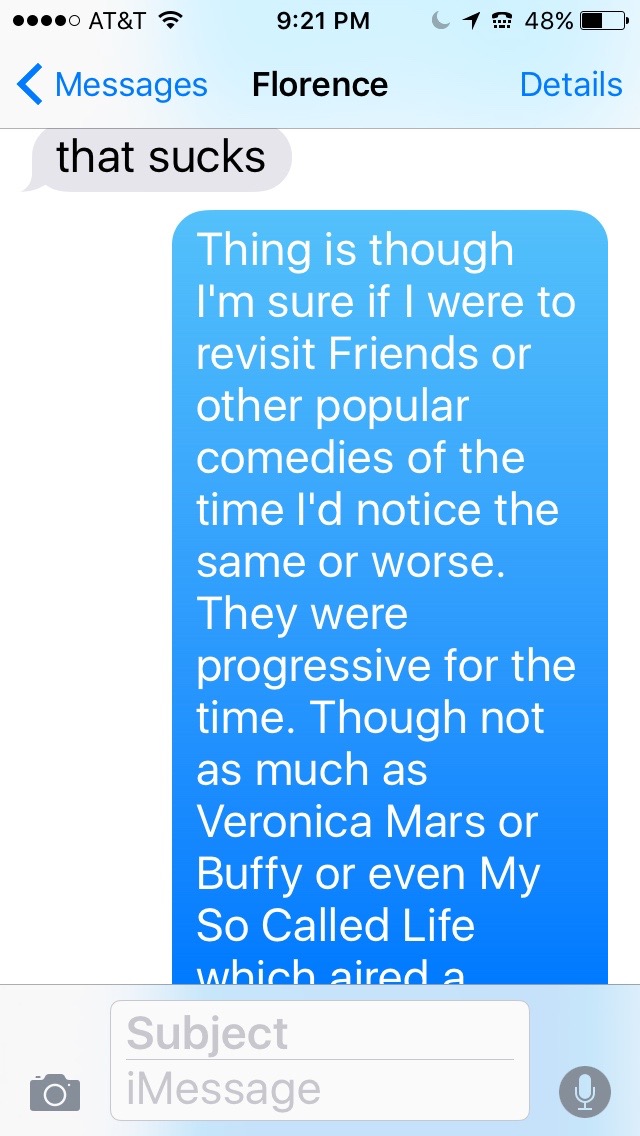 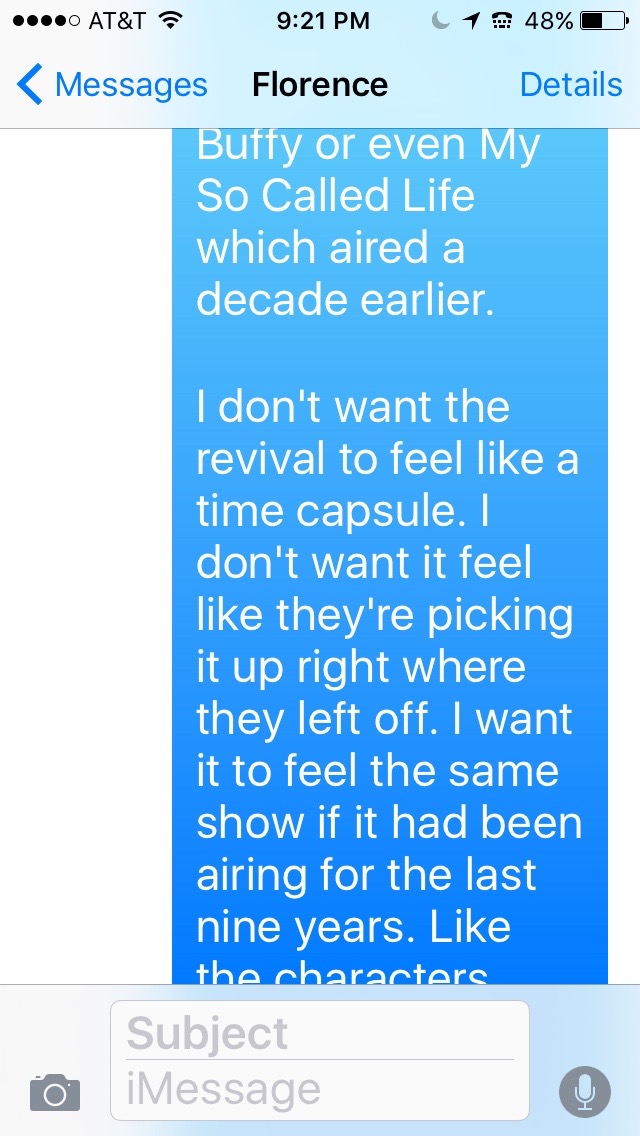 When I say it wasn’t as progressive as those other shows I mean that I don’t recall them casually tossing off fat jokes in the same manner. Though I haven’t rewatched them quite as recently so I could be misremembering.

However, those shows didn’t feature any important characters that weren’t Hollywood’s default body type. So in that way, Gilmore Girls was the more progressive show. In fact, they’re still way ahead in that respect. I can’t think of a single current CW show (Gilmore’s former network) with a fat character in the cast. Vampire Diaries? No. The Berlanti DCverse? Don’t watch all of them but I don’t think so. Not Supernatural either. The closest I can come up with is Jane from Jane the Virgin while she was pregnant. Which does not count at all. At least I hope most people would not count pregnant as a fat. Nope Gilmore Girls was definitely and sadly ahead of the curve not just by portraying fat people as complex, interesting people, but by even acknowledging their existence.

By the way, Orange is the New Black is a great example of a show featuring people but mostly woman of all shapes and sizes. And it’s a huge hit. So now Hollywood has to admit that not-skinny people exist! They’re just all in prison! 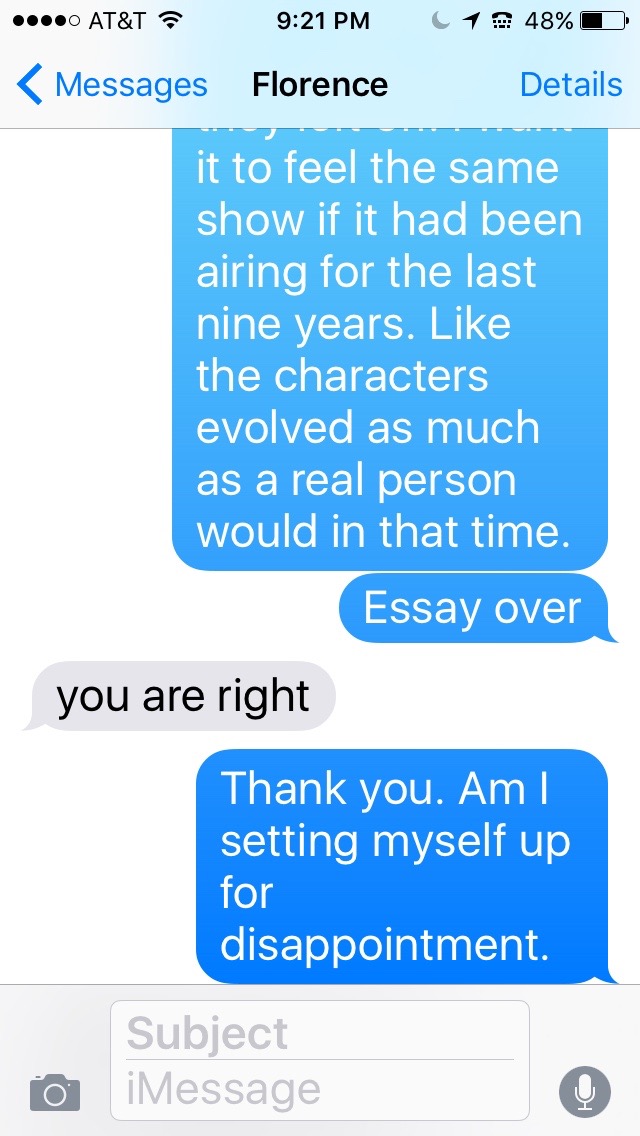 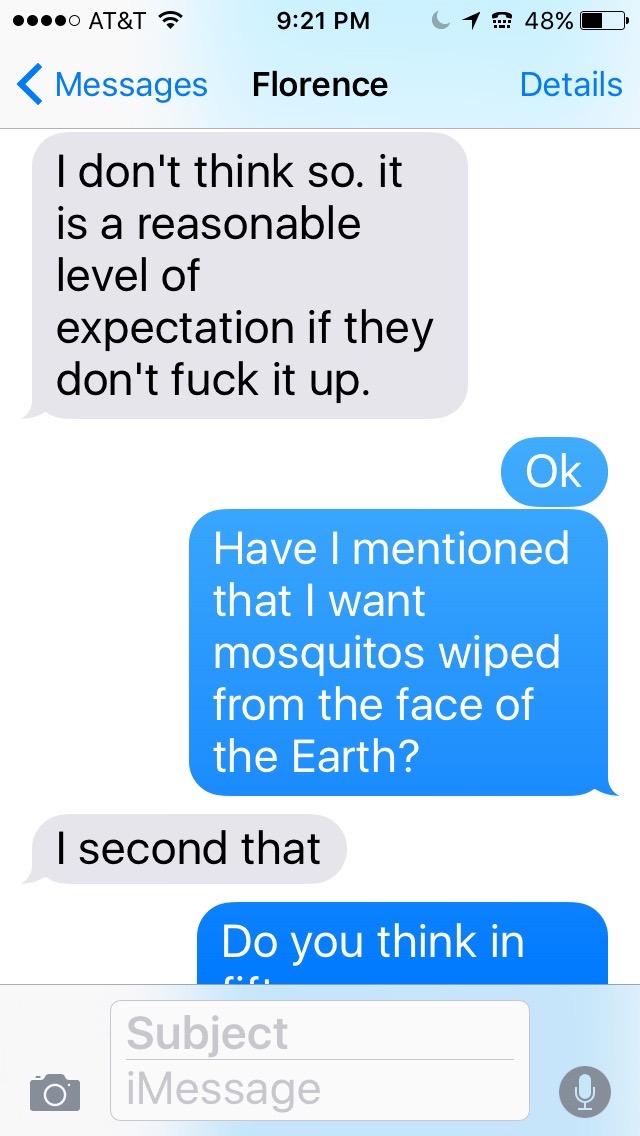 So that’s the crux of my worries about the revival. I love the show. I loved it back then, and I’m thrilled to be getting more. I’m eager to see Luke and Lorelai reunite. Because c’mon they have to. I want to know how Emily is coping without Richard. How Rory’s writing is going. How many more careers Kirk has collected. Heck, I’m even curious whether Paul Anka the dog conquered his many neuroses. But I worry that with all the expectations creator Amy Sherman Palladino will either A) not be aware that attitudes have changed since the show went off the air. Or B) will feel that doing anything differently will be a betrayal to the fans.

I’m still prepared to follow where the Gilmore Girls lead, just not quite as blithely as I was before revisiting the show.

Finally, mosquitos are the worst and I need them to stop. 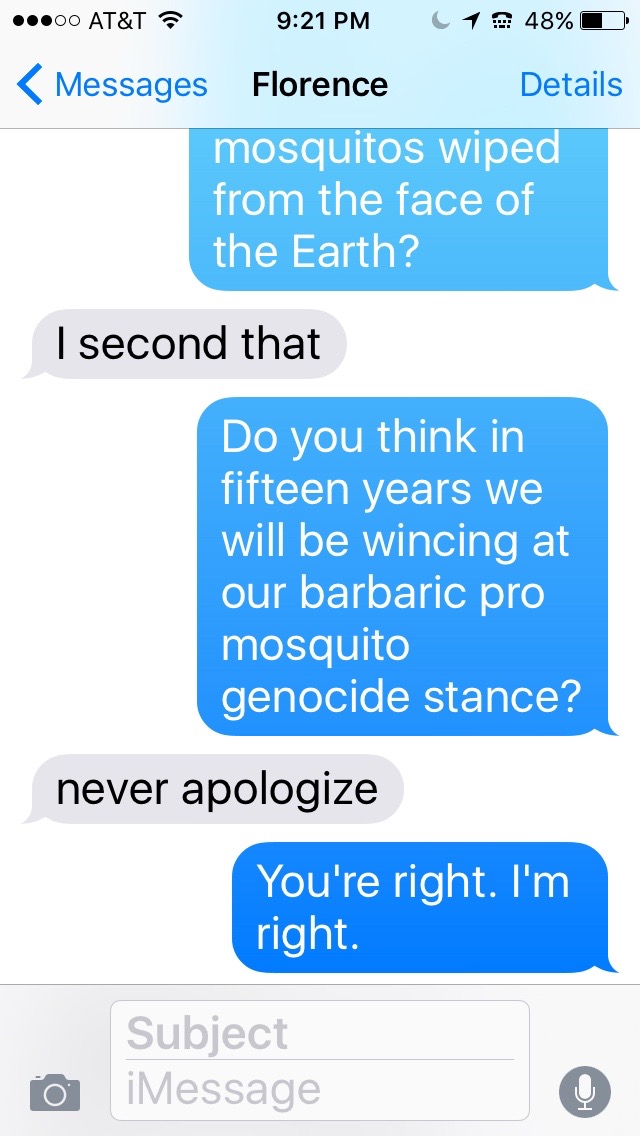 And on that note. I’m done.